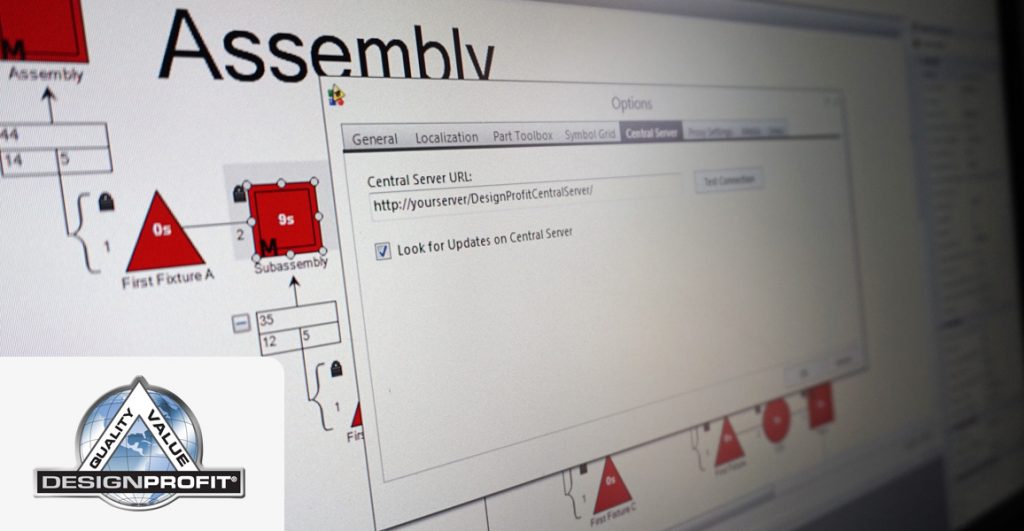 Central Server is our premier, multi-team, collaboration tool, allowing multiple users to work on one project simultaneously. The “check in” and “check out” functionality gives the project leader the ability to manage all changes while allowing other users to view changes across a project or platform.

Some of the features that are accessible to manage are:

Across a large organization or team, having a “check in” compliance tool like Design Profit’s Central Server allows the users to collaborate, seamlessly and in tandem, while monitoring changes and giving certain permissions so that design surprises cannot creep up without administrative approval (same as above) or group acknowledgement. Several product design engineers working in a larger company could have multiple working models with different geometries and working scope. Our Central Server tool syncs everyone working on the project so that compliance amongst the design team is aligned while checking each other’s work and having management buy in/oversite.

If the Central Server system is purchased with the MRL application it ensures compliancy and consensus in tandem with the MRL checks and balance systems across all teams. A team leader will assign parts across the group so that the overseeing body can evaluate and approve work further ensuring a realistic MRL level has been achieved across the whole team. This avoids multiple teams claiming different MRL level achievement on the same project.

At Design Profit, we take security very seriously with regards to the Central Server application. To ensure this we have created definable roles on Central Server:

Reader: An individual or perhaps a manager who oversees the project but doesn’t have write ability.

User: Who can make changes to the project but can’t delete the project.

Administrator: A user who can add users to the project and oversee

The Admin, User and Reader roles are product specific and define rights to certain projects, but not others.

All of our databases are encrypted and protected from outside and inside eyes in the company without implicit permissions. Administrators can assign the rights so that only specific defined users can see or augment the data secured by a password and managed by our central server.

Your data is also segregated in a way that even Munro employees cannot see or access the data, unless an Administrator asks us to specifically override the protocols to look at or retrieve the data. Data is transferred over your internal intranet for ease and internal security.

Floating licenses are fashioned in such a way that any workstation or computer can use the license at any given time as long as another has logged off, allowing for multiple users to easily and quickly switch between stations or computers, allowing for flexibility among teams or users. Every user change integrates seamlessly within Central Server system. The licensing manager will constantly monitor who is accessing the data so that extraneous users cannot log on. Every 15 minutes the system checks on stations and users, and if the time passes, a license is freed up.

With more than 50,000 copies sold, the Munro Workshop Book is a product design best practices reference guide with 150 pages of useful guidelines, charts and tables to assist in reducing product complexity and total life cycle costs.